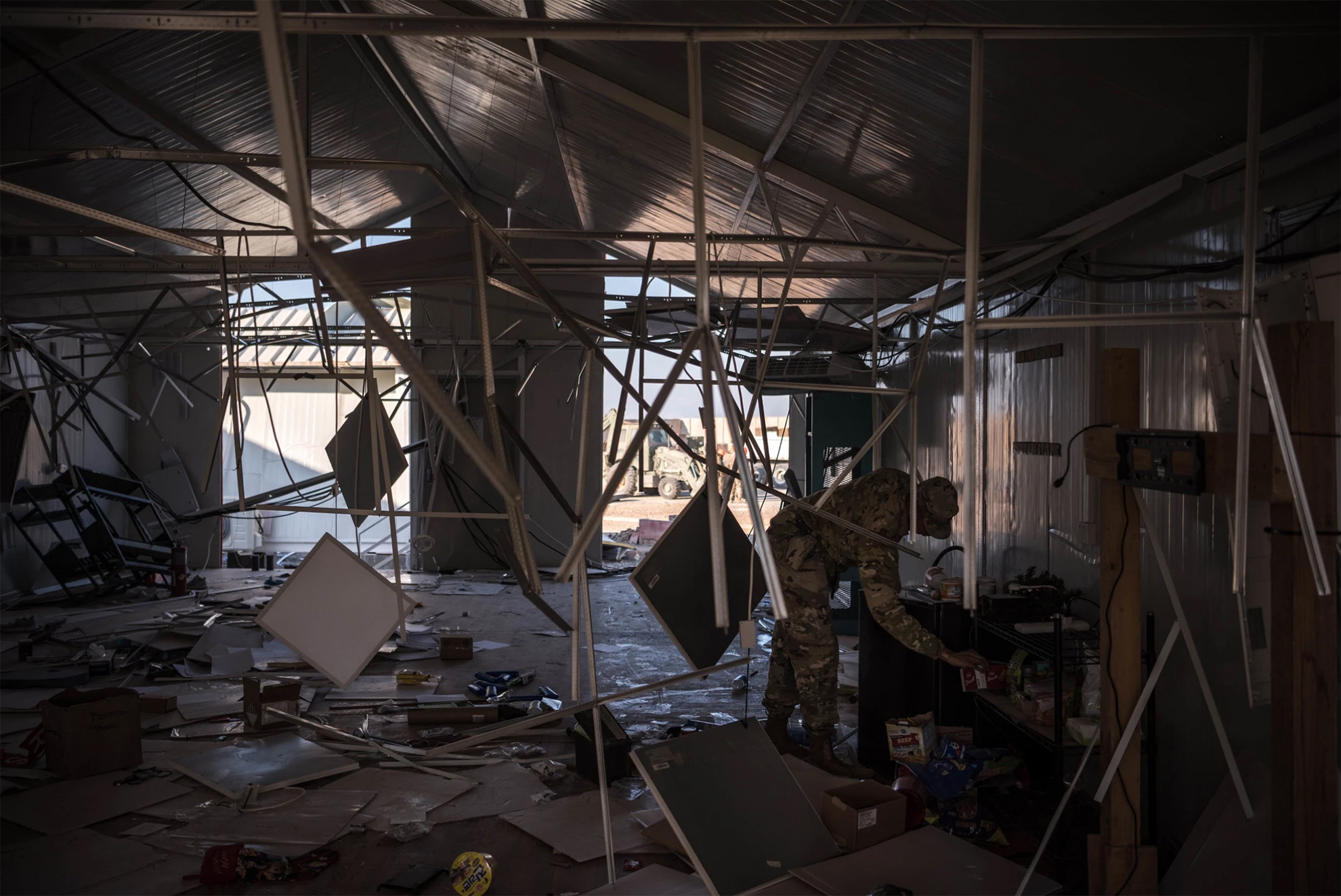 Ayn al Asad Air Base in western Iraq after an Iranian missile attack on Jan. 8. The number of service members experiencing symptoms associated with brain injuries has since topped 100. Photo Credit…Sergey Ponomarev for The New York Times

Brain Injuries Are Common in Battle.
The Military Has No Reliable Test for Them.

Traumatic brain injury is a signature wound of the wars in Iraq and Afghanistan. But the military still has no objective way of diagnosing it in the field.

By Dave Philipps and Thomas Gibbons-Neff for nytimes.com, February 15, 2020

U.S. troops at Ayn al Asad Air Base in western Iraq hunkered down in concrete bunkers last month as Iranian missile strikes rocked the runway, destroying guard towers, hangars and buildings used to fly drones.
When the dust settled, President Trump and military officials declared that no one had been killed or wounded during the attack. That would soon change.

A week after the blast, Defense Department officials acknowledged that 11 service members had tested positive for traumatic brain injury, or TBI, and had been evacuated to Kuwait and Germany for more screening. Two weeks after the blast, the Pentagon announced that 34 service members were experiencing symptoms associated with brain injuries, and that an additional seven had been evacuated. By the end of January the number of potential brain injuries had climbed to 50. This week it grew to 109.

The Defense Department says the numbers are driven by an abundance of caution. It noted that 70 percent of those who tested positive for a TBI had since returned to duty. But experts in the brain injury field said the delayed response and confusion were primarily caused by a problem both the military and civilian world have struggled with for more than a decade: There is no reliable way to determine who has a brain injury and who does not.

Top military leaders have for years called traumatic brain injury one of the signature wounds of the wars in Iraq and Afghanistan; at the height of the Iraq war in 2008, they started pouring hundreds of millions of dollars into research on detection and treatment. But the military still has no objective tool for diagnosing brain injury in the field. Instead, medical personnel continue to use a paper questionnaire that relies on answers from patients — patients who may have reasons to hide or exaggerate symptoms, or who may be too shaken to answer questions accurately.

The military has long struggled with how to address so-called invisible war wounds, including traumatic brain injury and post-traumatic stress disorder. Despite big investments in research that have yielded advances in the laboratory, troops on the ground are still being assessed with the same blunt tools that have been in use for generations.

The problem is not unique to the military. Civilian doctors struggle to accurately assess brain injuries, and still rely on a process that grades the severity of a head injury in part by asking patients a series of questions: Did they black out? Do they have memory problems or dizziness? Are they experiencing irritability or difficulty concentrating?

“It’s bad, bad, bad. You would never diagnose a heart attack or even a broken bone that way,” said Dr. Jeff Bazarian a professor of emergency medicine at the University of Rochester Medical Center. “And yet we are doing it for an injury to the most complex organ in the body. Here’s how crazy it gets: You are relying on people to report what happened. But the part of the brain most often affected by a traumatic brain injury is memory. We get a lot of false positives and false negatives.”

Without a good diagnosis, he said, doctors often don’t know whether a patient has a minor concussion that might require a day’s rest, or a life-threatening brain bleed, let alone potential long-term effects like depression and personality disorder.

At Ayn al Asad, personnel used the same paper questionnaires that field medics used in remote infantry platoons in 2010. Aaron Hepps, who was a Navy corpsman in a Marines infantry company in Afghanistan at that time, said it did not work well then for lesser cases, and the injuries of many Marines may have been missed. During and after his deployment, he counted brain injuries in roughly 350 Marines — about a third of the battalion.

After the January missile attack, Maj. Robert Hales, one of the top medical providers at the air base, said that the initial tests were “a good start,” but that it took numerous screenings and awareness among the troops to realize that repeated exposure to blast waves during the hourlong missile strikes had affected dozens.

Traumatic brain injuries are among the most common injuries of the wars in Iraq and Afghanistan, in part because armor to protect from bullet and shrapnel wounds has gotten better, but they offer little protection from the shock waves of explosions. More than 350,000 brain injuries have been reported in the military since 2001.

The concrete bunkers scattered around bases like Ain al Assad protect from flying shrapnel and debris, but the small quarters can amplify shock waves and lead to head trauma.

The blasts on Jan. 8, one military official said, were hundreds of times more powerful than the rocket and mortar attacks regularly aimed at U.S. bases, causing at least one concrete wall to collapse atop a bunker with people inside.

Capt. Geoff Hansen was in a Humvee at Ayn al Asad when the first missile hit, blowing open a door. Then a second missile hit.

“That kind of blew me back in,” he said. “Blew debris in my face so I went and sat back down a little confused.”

A tangle of factors make diagnosing head injuries in the military particularly tricky, experts say. Some troops try to hide symptoms so they can stay on duty, or avoid being perceived as weak. Others may play up or even invent symptoms that can make them eligible for the Purple Heart medal or valuable veteran’s education and medical benefits.

And sometimes commanders suspect troops with legitimate injuries of malingering and force them to return to duty. Pentagon officials said privately this week that some of the injuries from the Jan. 8 incident had probably been exaggerated. Mr. Trump seemed to dismiss the injuries at a news conference in Davos, Switzerland, last month. “I heard they had headaches,” he said. “I don’t consider them very serious injuries relative to other injuries I have seen.”

In the early years of the war in Iraq, troops with concussions were often given little medical treatment and were not eligible for the Purple Heart. It was only after clearly wounded troops began complaining of poor treatment that Congress got involved and military leaders began pressing for better diagnostic technology.

Damir Janigro, who directed cerebrovascular research at the Cleveland Clinic for more than a decade, said relying on the questionnaire makes accurate diagnosing extremely difficult.

“You have the problem of the cheaters, and the problem of the ones who don’t want to be counted,” he said. “But you have a third problem, which is that even if people are being completely honest, you still don’t know who is really injured.”

In civilian emergency rooms, the uncertainty leads doctors to approve unnecessary CT scans, which can detect bleeding and other damage to the brain, but are expensive and expose patients to radiation. At the same time doctors miss other patients who may need care. In a war zone, bad calls can endanger lives, as troops are either needlessly airlifted or kept in the field when they cannot think straight.

Mr. Janigro is at work on a possible solution. He and his team have developed a test that uses proteins found in a patient’s saliva to diagnose brain injuries. Other groups are developing a blood test.

Both tests work on a similar principle. When the brain is hit by a blast wave or a blow to the head, brain cells are stretched and damaged. Those cells then dispose of the damaged parts, which are composed of distinctive proteins. Abnormal levels of those proteins are dumped into the bloodstream, where for several hours they can be detected in both the blood and saliva. Both tests, and another test being developed that measures electrical activity in the brain, were funded in part by federal grants, and have shown strong results in clinical trials. Researchers say they could be approved for use by the F.D.A. in the next few years.

The saliva test being developed by Mr. Janigro will look a bit like an over-the-counter pregnancy test. Patients with suspected brain injuries would put sensors in their mouths, and within minutes get a message that says that their brain protein levels are normal, or that they should see a doctor.

But the new generation of testing tools may fall short, said Dr. Gerald Grant, a professor of neurosurgery at Stanford University and a former Air Force lieutenant colonel who frequently treated head injuries while deployed to Iraq in 2005.

Even sophisticated devices had trouble picking up injuries from roadside bombs, he said.

“You’d get kids coming in with blast injuries,” he said, “and they clearly had symptoms, but the CT scans would be negative.”

He was part of an earlier effort to find a definitive blood test, which he said in an interview was “the holy grail.” But progress was slow. The grail was never found, he said, and the tests currently being developed are helpful for triaging cases, but too vague to be revolutionary.

“Battlefield injuries are complex,” he said. “We still haven’t found the magic biomarker.”