Sunday Night Football analyst Rodney Harrison issued a passionate plea to NFL stars to not return to the field if they get hurt following the handling of Tua Tagovailoa’s distressing situation Thursday night.

The two-time Super Bowl champion’s comments follow a joint statement by the NFL and NFLPA in which changes to the concussion protocol are said to be imminent.

Harrison’s comments and the statement come in the wake of Miami Dolphins quarterback Tua Tagovailoa being taken to hospital with a concussion in Thursday night’s game vs. Cincinnati.

The incident came after the Dolphins quarterback surprisingly finished out his side’s win over the Bills last Sunday, despite receiving a brutal hit in the first half.

Harrison, a 49-year-old retired pro, played 15 seasons in the NFL, nine with the San Diego Chargers before his final six in Foxborough with New England.

‘I would get hit, the entire stadium was spinning around and I would go back into the game,’ Harrison said of his playing days on NBC’s SNF pregame coverage.

‘It’s not worth it — and I would implore these young men; don’t go back on that football field if you get hurt.’ 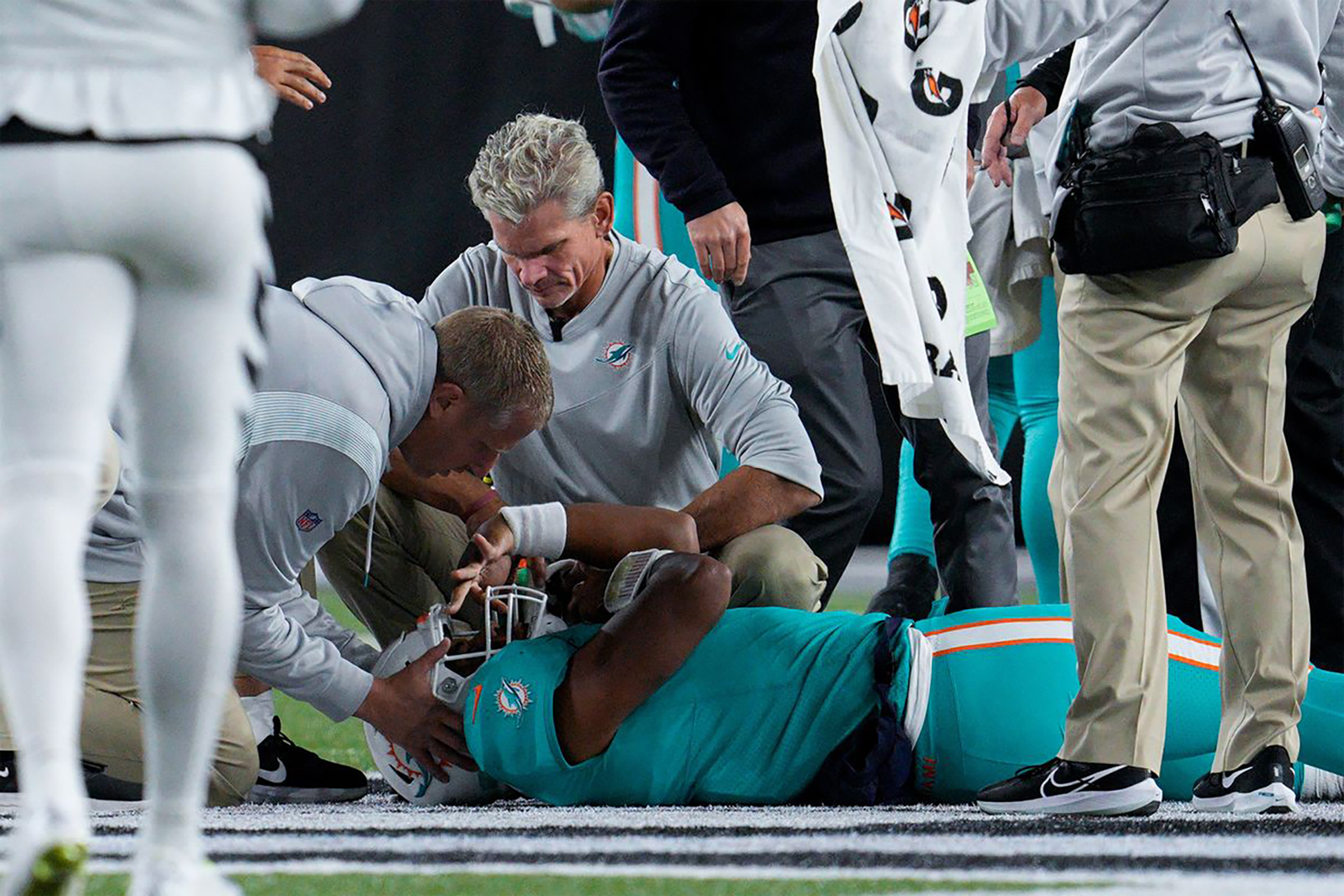 ‘I don’t want them to have to feel like me and so many other former players that had to deal with concussions; whether it’s depression, anxiety, paranoia, broken relationships, not being able to communicate with your spouse and things like that,’ Harrison continued.

‘It’s a lot — CTE takes you to a dark place and I want these players to know it’s not worth it.

‘Please take care of yourself. Don’t depend on the NFL, don’t depend on anybody. If there’s something wrong with your head, report it.’

On Saturday, the NFL and NFLPA announced they are working collaboratively to modify the aforementioned protocols and anticipate changes to occur in the ‘coming days.’

The statement, released Saturday evening, read: ‘The joint NFL-NFLPA investigation into the application of the Concussion Protocol involving Miami Dolphins’ quarterback Tua Tagovailoa remains ongoing. Therefore, we have not made any conclusions about medical errors or protocol violations.

‘The NFL and the NFLPA agree that modifications to the Concussion Protocol are needed to enhance player safety.

‘The NFLPA’s Mackey-White Health & Safety Committee and the NFL’s Head Neck and Spine Committee have already begun conversations around the use of the term “Gross Motor Instability” and we anticipate changes to the protocol being made in the coming days based on what has been learned thus far in the review process.

‘The NFL and NFLPA share a strong appreciation for the unaffiliated neurotrauma consultants who contribute their time and expertise to our game solely to advance player safety. This program has made our game safer for the athletes who play it for the past twelve seasons.

The gravity of Tagovailoa’s injury last weekend vs. the Bills — and the broader discussion surrounding protocols — were reinforced Thursday against the Bengals, as he left the field on a stretcher following another brutal blow to the head.

This time, Tagovailoa was diagnosed with a concussion and hospitalized (he was discharged Thursday night and flew home with the team), lending credence to the idea that he shouldn’t have been playing in the Dolphins’ Week 4 matchup to begin with.

The quarterback was officially diagnosed with a back problem Sunday and with concussion protocols claimed to have been followed.

Tagovailoa is said to be in good spirits on his road to recovery if his statement on Twitter Friday is anything to go by.

‘I want to thank everyone for all of their prayers and support since the game last night,’ he wrote.

‘It was difficult to not be able to finish the game and be there with my teammates, but I am grateful for the support and care I’ve received from the Dolphins, my friends and family, and all the people who have reached out.

‘I’m feeling much better and focused on recovering so I can get back out on the field with my teammates.’