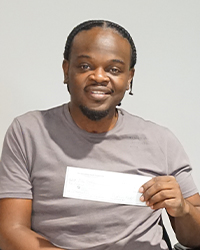 At the age of 20, while visiting family and friends over the Christmas holiday weekend I became a victim of gun violence. A couple of friends and I were on way home from a convenience store when shots rang out striking two out of the three of us who were walking. My close friend unfortunately would succumb to the injury suffered, and I suffered a traumatic brain injury. The injury did rob me of the ability to walk but it did NOT stop me from being a productive member of society—So a bullet to the head didn’t stop me.

Going from 100% independent to 110% dependent is a shock to say the least. I spent 5 months total in a hospital bed-ridden. I was in a medical induced coma for a few weeks, I underwent multiple surgeries but ultimately survived. In hindsight, my experience is unexplainable and every time I explain my situation, it’s always met with, “wow,” “that’s amazing,” or “I have never heard of that happening.” I will explain the phenomenon that I experienced later. After waking from my coma, I was terrified and confused. I was absolutely unable to move anything at all. What I’m expressing is, multiple weeks in a coma didn’t stop me.

The initial stages of acquiring an injury was the most difficult. I felt ashamed and as a result I would rather not be seen. All I would do was lie in bed and cry. Therapy consist of me sitting in my wheelchair reaching for things with a reacher/grabber. I was always aching and just wasn’t in a good headspace. I assumed I was the only person going through my situation, it got so bad that I felt like I had no reason to alive. Existing in your thoughts can be depressing but when one has the will and dedication, overcoming obstacles is inevitable. What I’m basically saying is depression didn’t stop me.

For the most part, my days consisted of me dwelling in self-pity. The only thing that I had to fuel me was the concept that someone, somewhere has it worse than I. I would sit for hours just thinking, “what about that person that is at the bottom, could they say someone has it worst?” Furthermore, I realized that what I was doing was allowing myself happiness believing that someone was worse off than me. I didn’t want to live that way, I then formulated the concept to put forth effort that could possibly inspire that person who had it worst, to do something that could inspire that person to believe in something. In doing so, I realized there’s good in all things, even my situation. A situation that took my ability to be mobile was the same thing that brought families together. It allowed me to see who really has my best interest. So, I began to focus on that, finding the good in all things. Anytime I would talk to others and share my phenomenal coma story, people would be in awe.

The story is of my coma experience, the entire five plus weeks I laid in a coma, I was dreaming. This dream was on-going the stint I was in a coma and I was living life as I had prior to my injury. I could walk, full capable and mobile. I had a schedule, basketball at the neighborhood recreation center on Mondays, Wednesdays, Fridays. Visiting family as I would normally do throughout the week, that consisted of stopping by grandma’s to play with my little cousin and eating good food—all the things I did prior to my injury, I was doing so in my dream which really while I was in a coma. The phenom is that when I would go “home” to sleep, I would go back to the exact hospital room I lay-in, while in my coma. And the day that I actually woke from my coma, while still in dream mode I was walking back to the room when I fell and couldn’t get back up. I was simultaneously coming out of the coma to that exact date of being immobile.

Being physically unable can be detrimental but that’s only if one allows it. Although I’m physically challenged, I never allow it to mentally pigeonhole me. As a result to the functioning and mobility I lost physically, I worked to maximize my mentality to always strive for excellence. I also developed the mentality of, perspective is everything and like how you can’t judge a book by its cover, I want others to know that one’s capabilities aren’t one’s actual one’s possession of the means or skill to do things.

I’m a quadriplegic wheelchair user as a result of a traumatic brain injury. I acquired my injury in 2006 and have not given up on making a recovery. Rehabilitation is what brought me to San Diego—while researching promising physical therapy programs. Project Walk is where I decided to attend and I received PT, OT & acupuncture. Project Walk is a pioneer in activity-based recovery and has been treating people living with paralysis for almost 20yrs. They’re a Certified Recovery Specialist that’s treated tens of thousands of clients with amazing results, some even making full recovery. I relocated from St. Louis to San Diego about 1 & a half year ago & I reside here in Vista with my girlfriend of 3 years. I’m on a fixed income and I recently earned an associate degree in Business Administration from Mira Costa Community College. I’m currently enrolled at California State San Marcos on my way to earn a Bachelors degree with an emphasis in Marketing. And whether I receive this scholarship, I will not allow it to stop me either.

I desire to share my story/journey, with hopes of uplifting & inspiring. My aim is to gain more knowledge, get insight & strategize on rehabilitating. Doing so added inspiration to an already inspiring story and sharing my story with others whether they have been through similar trials and tribulations as myself or not can be heartfelt and relatable. I believe there’s a sense of hope when there’s someone to relate and furthermore inspire others.

In closing, my journey has taught me that before my injury in when I was disabled. I was disabled because I was unaware of my potential, therefore my disability wasn’t in the physical form but rather to the affect that I wasn’t living up to my full capacity. Being immobile has taught me to be one with self, engage in dual perspective, and always home in on the positive aspects of all things and situations. I desire to define my disability and not allow it to define me, I want other to do the same. With this type of mindset, I believe that nothing, not even a brain injury will stop me—because I made the conscious effort to not allow it to.