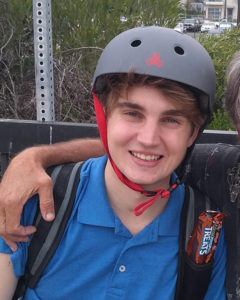 I’m going to start this essay off frankly. During my first two semesters of college I failed two courses. In high school, my courses were not very challenging. I could skate through school by merely showing up and using what I learned in class on the exams. Because school for me was a breeze, instead of studying I would stay up into the late hours of the night playing video games. Because I found high school so easy, the poor habits I was developing were of little consequence. These habits, though, hit me like a brick wall when I got to college.

My second year of college started off much better. I had started a part time job at the university’s recreation center, so now I was trying to balance work, school, my social life, sleep and hygiene, and lastly my recreational time, video games. I realized pretty early into the semester I was trying to balance too many demands. As such, I had to give something up. I had to decide what, to me, was important in my life because I had too many time vacuums. Clearly, school, a healthy social life, and taking care of myself are important activities, so I had to decide what was more important to me: a job that helps me pay for college or a time-waster that has already caused me to fail two courses. It was a hard slap in the face. I realized I had been unintentionally throwing my life away.

The semester after giving video games up and joining the ARC, I made a huge accomplishment. I made the Dean’s list for the College of Sciences. Additionally, I retook the course taught by the same professor I had failed in my major the previous semester. This time instead of earning an F in the Computer Science course, I earned an A. This struck me hard. Essentially, I could either take my classes seriously so I can contribute to society or just try to skate by in life. The choice to take life seriously was pretty easy to make. I was starting to be successful as a college student. I could not have predicted what would happen next.

The second semester of my sophomore year, spring of 2018, was the semester where I faced the greatest challenge I’ve had in my life to date. In February 2018, I was in a grave ski accident in northern California. I was skiing down the hill at approximately 60 miles per hour and hit a bump that caused me to flail down the mountain. Now I know this sounds crazy, but I’ve been skiing since I was three years old. As such, skiing this fast had become something I was comfortable doing; I shouldn’t have been so comfortable. The ski crash put me in a coma for a month and a half and when awakened, I could barely speak. I no longer had function below my knees and so I was in a wheelchair and had to be pushed around from one place to another. This was probably the low point of my life.

My first memories of my recovery are of me struggling to shuffle my way through parallel bars during physical therapy at Craig Hospital and barely getting across them. This was about two months after my accident. Unfortunately, outside of the parallel bars I had no stability with my legs, and so, I was in a wheelchair for the vast majority of the time. I was in a wheelchair from the time I came out of my coma in late February for the next four months. In addition to my physical difficulties, I had little awareness of my cognitive impairments and thought I was living in a videogame just because things had become so different, so quickly, for me. I would frequently ask for other people to kill me just because I wanted to respawn and have things get back to normal. It wasn’t until I had several sessions with my neuropsychologist that I finally realized I wasn’t in a videogame and this was my new reality. I struggled with this fact for a long time but through my experiences in Speech Therapy, my speech therapist was able to walk me through acceptance of the new me. If it wasn’t for my experiences in rehabilitation, I’m certain I wouldn’t be where I am today.

At the time I’m am writing this, it is just past one-year post injury. Today, I don’t use a wheelchair. Frankly I don’t even use a walker. I walk within my braces alone. My goals include finishing my education at San Diego State University. I’m living on campus and have resumed my classes in spring semester of 2019; however, this has become significantly more difficult for me. My retention of information has become more volatile than it was prior to my brain injury. As such, I have to study, by reviewing lecture notes and course materials, considerably more than I did before injury. Additionally, getting around to my classes is a straining endeavor due to the fact walking to class takes a lot of energy. Also, I find myself financially impaired because I am only working eight hours a week as a consequence of the stamina required. I’m taking fewer classes per semester; therefore, it is likely I will be in school longer than planned. As such, my limited savings won’t take me through my new required timeline. Regardless, I am determined to pursue the goals that I had prior to injury even with the added challenges.

On the plus side, the year of rehabilitation helped me find my resolve and become comfortable enduring the struggles I face today. I received acute care at Craig Hospital in Colorado for two and half months, then transitional inpatient care at Casa Colina in Pomona for six weeks, and then returned home to live with my parents in Carlsbad and entered the Brain Injury Day Program at Scripps Encinitas. After six weeks there, my therapy days were reduced a little at a time as I slowly met my goals. All of the challenges I faced in rehabilitation improved my dedication, such that I now have a greater ability to work through difficulties than I was able to prior to my injury. While I think accomplishing my goals will be more difficult than before my accident, I think the ceiling of my desire has only increased. I’m far more motivated to get past struggles because I’ve seen my ability to get over them during the early days of my injury. If an obstacle is in my path I say “bring it on” because I have seen the strength in my character to overcome adversity. For example, at a SDBIF Care Conference at Scripps Encinitas in August, the presenter talked about how assistive devices are useful when getting through an injury but shouldn’t become a dependency. I walked into that conference using my cane and I walked out of the conference holding it horizontally and haven’t used it since. I am thankful to all of my therapists for showing me the power I have in my determination to get things done.

I’m now at a stage in my life that is primarily about refinement. This is similar to how college was for me during freshman year. I didn’t perform well my freshman year, but I did learn a lot. Similarly, now I’m in a position where I’m finding college to be causing me a lot of difficulty due to my injury and the habits I developed in my recovery; however, I’m expecting to tackle my reintegration to school with determination, knowing that I’ve conquered hurdles like these in both the stages of my recovery as well as between my freshman and sophomore year before.