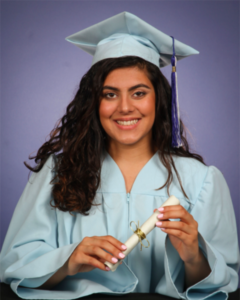 We are constantly telling ourselves a story, about who we are and where we are going. On September 28, 2016, my story dramatically changed.

I used to be a cheerleader for my high school team. We were practicing for our big homecoming half time performance when one of the flyers slipped out of my hand. I was holding her up, just above my head. When she came down, her elbow hit me, with force, on the right side of my head. I immediately knew something was wrong. I felt extremely dizzy, my vision was going black, and my hearing felt congested. I brushed it off and came to the conclusion that I was just dehydrated.

I went to school the next day, and symptoms slowly began to present themselves. Nausea, dizziness, headaches, sensitivity to light, sound, and touch, brain fog, confusion, blurry vision, fainting spells, memory loss, trouble with concentration and reading, and so many more that it seems unfathomable at this point. I went to the doctor and was finally diagnosed with a mild concussion. I was told that the symptoms would resolve themselves in a week and that everything should go back to normal. But it didn’t. The symptoms got worse, and more kept coming. It took missing months of school to even be able to walk outside my dark and quiet bedroom. It is here that I was diagnosed with post-concussion syndrome. I have now had post- concussion syndrome for years.

There’s a double standard in society where people with obvious illness and disabilities are automatically judged, while people with invisible illnesses or disabilities are often doubted. This results in hesitation in brain injury patients in every aspect of their lives. If we tell the people who are put in place to help us too much information, we are disregarded as over exaggerators. If we say too little, we are not seen as significant enough to provide assistance to.

I had people who I looked up to tell me I was setting myself up for failure. That was something I had never put into question. Everything always had to be perfect. I had to be perfect. That word rang in my jumbled mind; like Their voices and faces engraved into my thoughts. I could see them, concerned eyes, a delicate voice.

“I hope you feel better.” That’s what they all said. Did they mean it? Did they really have compassion? I couldn’t see my friends, I couldn’t see my family, and just the slightest touch or sound caused excruciating pain. How could I feel better? How could I make any of this better? I felt trapped. Trapped in the prison of my own mind. My own body.

I had convinced myself that I wasn’t good enough due to something I had no control over. Failure. It came again, and again, and again. I couldn’t go outside, I couldn’t read, and I had no cohesive thoughts. I tried, I tried my best. I was told that was the most important thing to do but over time it would come again. I couldn’t do it. No option but to accept it. I had people tell me there was no hope for a difference in my life. Everything had changed. I had been left to think that I was useless. My brain injury had changed me for the worse, or so I was told.

After missing my junior year of high school I realized that I was strong, I was loved, and I was worth it. I was worth getting through the hardships I had to push through, I was worth every second I had in this life I was given, and I knew that everything happened for a reason. My brain injury could, and would not control me; rather empower me to be the person I’ve always wanted to be. This is where we started Beyond Concussion. We created a community to allow people with brain injuries of any kind to feel safe and wanted and be given the free space to express themselves. I am now doing and feeling better than I ever have. Yes, my symptoms are still there, but mentally I know that I am strong. I am able to withstand what I never thought possible, and I am able to push myself to limits I have control of.

Everything that has happened to me, all the people I have met, and Beyond Concussion have shaped me to be the person I am today and I wouldn’t take it back for anything.