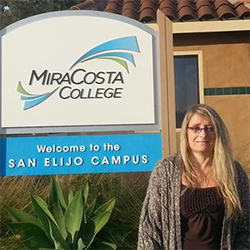 June 3, 2006 was the day my life changed forever.  I suffered from an Arterial Gas Embolism while SCUBA diving. People don’t typically survive from an AGE and nobody thought that I would either, but I’m not your typical person. I did survive, despite having a severe acquired brain injury.  But nobody knew quite what to expect for my future.

In August 2015 I returned to Mira Costa College.  Seeing that it had been many years since I had taken a college class for credit I decided to ease in and took 7 units.  Complex Thinking and Composition (English 202) and Cultural Communication. I have to admit that I was a bit nervous those first few days, unsure if the other students would accept me due to my disability or for the fact that I was 44 years old and attending community college.  Despite the fact that I was the oldest person in both classes (and sadly even older than my instructors) I loved it! For the most part I was treated just like any other student.  It felt really good to be back out in the world of “normal people” and actually fit in.

To say my classes were challenging would be an understatement. The first paper that I had to write for in my English class was a rhetorical analysis essay on Martin Luther King’s “Letter From a Birmingham Jail.”  Rhetorical analysis essay? What in the world is that? We never learned about this in high school. Then I was told to do it in MLA format – once again something I didn’t know how to do.  I was going to have a lot to learn. As I was writing the paper I didn’t know what to write; I didn’t know what to say and I was getting frustrated.  I started to wonder if I was getting in over my head.   The paper was supposed to be 5 to 6 pages but I could only come up with enough words for two and a half pages.  I earned a 75 on it but because it was two and a half pages too short the grade dropped  to a 70. I was having so much trouble that at this point I felt like I would be lucky if I earned a C at the end of the semester.   For my second paper we had to identify a social problem and then come up with a solution.   I did my paper on public transportation and how the lack of proper transportation perpetuates inequality.  Again I struggled with what to write and this paper had to be 6 to 8 pages long.  Somehow I did it, and my paper was 7 and a half pages long  It wasn’t easy but I wasn’t going to lose points because my paper wasn’t  long enough again. I must have learned something along the way because I received a 90 on my paper! Then it came to the midterm and we had to write a timed rhetorical analysis essay. It takes me a long time to come up with what I want to write, to get my thoughts together, and figure out what to say.  I used every second of the double time that I had (one of my DSPS accommodations is double time on exams in a quiet room) to write it and when I gave my paper to the proctor I was really uncomfortable with it. Boy was I surprised when I found out I earned a 90 on this paper as well! From this point on I earned nothing less than a 90 on any paper or assignment in that class.   I ended the semester with a 4.0 GPA as I earned an A in both of my classes.

Currently I am taking 13 units.  The classes that I am enrolled in are Oceanography, Group Communication, Human Development and Statistics for Behavioral Sciences.  Despite the fact that I suffered a femur fracture recently while attending an adaptive skiing clinic and having to miss several weeks of classes I am still earning A’s in all of them.

I am still I submitted a petition to graduate and on May 27, 2016 and I will earn my AA in Psychology.  In October I applied to Cal State San Marcos and just found out that I was accepted! So, in the fall of 2016 I will be attending CSUSM majoring in Social Science – Psychology.  There is no doubt in my mind that it will be challenging but I have always risen to a challenge in the past and I have proven to myself that I can do it.  I know that my brain injury can’t stop me and one day I will achieve my goal of working in the Social Work field.