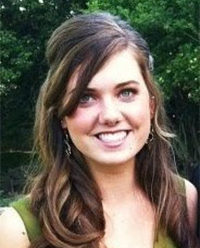 On June 2, 2012 Hayley Brown, 18, was volunteering with the Flying Doctors of Mercy (Liga International) on a medical mission in México when the airplane in which she was traveling struck power lines and crashed inverted into a river. The pilot died from his injuries, and Hayley, sitting just behind the pilot,was ejected from the plane, and suffered severe injuries. She received blunt force trauma to her head and chest, resulting in traumatic brain injury (TBI) and a collapsed lung, severe lacerations and infections, and fractures of her spine and left leg. She was placed into a medically-induced coma in México, and was airlifted to the USA on Thursday June 7, 2012. Hayley had lumbar spinal fusion on July 9, 2012. After a month and a half in the hospital, she was finally stable enough to transfer to a Rehabilitation Hospital on July 18, 2012. She’s now home and making excellent progress. Her rehabilitation road is long, she will follow an intensive brain injury and physical rehab program. Much has been written about this miraculous event and although they say the crash was “not survivable,” against all odds, Hayley survived!