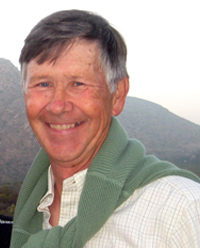 Don Strom, whose journey back from a devastating brain aneurysm, has become an inspiration for many.

Don served for 14 years on the board of directors of the San Diego Brain Injury Foundation. “I joined the Board in 1994, so after all those years I think I’ve earned a vacation,” said Don upon his retirement. Don’s 1992 aneurysm resulted in aphasia, a severe language disability. Don’s response to his condition has been impressive. One year after joining the board of directors he became vice president and just two years later, in 1997, he became the first brain injury survivor to serve as president of the SDBIF board. “Don always greets newcomers at our Saturday meetings and makes them feel so at home,” remarked Susan Hansen, COO for SDBIF. “When he shares his story, he is an inspiration to survivors as well as family members. For all these years, Don has acted like an “ambassador” for the Foundation —through fund-raising, building awareness of the Foundation, volunteering, etc. SDBIF is grateful to Don and Jane for all the many years of service they have given to the Foundation.”

Don’s rich legacy with the Brain Injury Foundation includes many achievements. He is very proud of the growth of the Saturday member meetings which he led for 12 years, first at the Aerospace Museum, then at Joyce Beers Community Center. “The best thing about those meetings is seeing people smile. In the early 90s the meetings were held at the Aerospace Museum in Balboa Park, where 10-15 people attended. Then, Mia Miyatake (executive director) and I asked survivors and caregivers to introduce themselves as a way of making everyone feel comfortable and helping them get to know one another. I remember one man who couldn’t speak… it was his time for introductions and allthough he couldn’t speak, he felt the support of the crowd and just gave a big smile. Now, we sometimes have as many as 50 or 60 people attending those Saturday meetings.”

Volunteering is something else Don highly recommends for survivors. “Survivors should not sit around doing nothing. Get out, talk to other survivors and caregivers, help each other. When I was struggling, my wife Jane helped me find the right words, and found places for me to volunteer. Sue Hyatt worked with me for five years to help me read again. “Speaking can still be difficult for me with my aphasia. But it’s all about helping each other. Brain injury survivor Chuck Hansen had memory problems but could speak well. I couldn’t speak as well but had a clear memory. So we made a good team!”

Although Don has retired from the board, Don did not retire to a rocking chair. He golfs twice a week, continues his 17 years on the SDBIF Golf Tournament and 11 on the Annual Friendraiser committees, has taken up art, and speaks at local high schools and service clubs like Rotary about surviving and recovering from brain injury. Don’s SAE fraternity friends from the University of Washington created a Don Strom Scholarship Fund, which enables Don to offer financial support to brain injured survivors for events like the SDBIF Golf Tournament, tickets for special theater programs, and more. Don Strom may have retired from the board, but he remains an active volunteer. Don continues to create quite a legacy at the SDBIF.