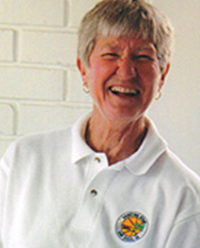 Eight years ago, Donna Benson was camping with friends at Waterton Lakes National Park in Canada when she suffered a grand mal seizure in the middle of the night. “I’d never been sick; I’d never even used sick leave!” she said. The next thing she knew, she was waking up from surgery to remove a brain tumor in a San Diego hospital.

Donna had to learn to walk and talk again. By the next year, she was running and riding a bike, albeit tentatively. In 2002, she went on to finish third in the 60-64 age group of the AARP-sponsored TriUmph Classic triathlon in Balboa Park. The following year, she won!