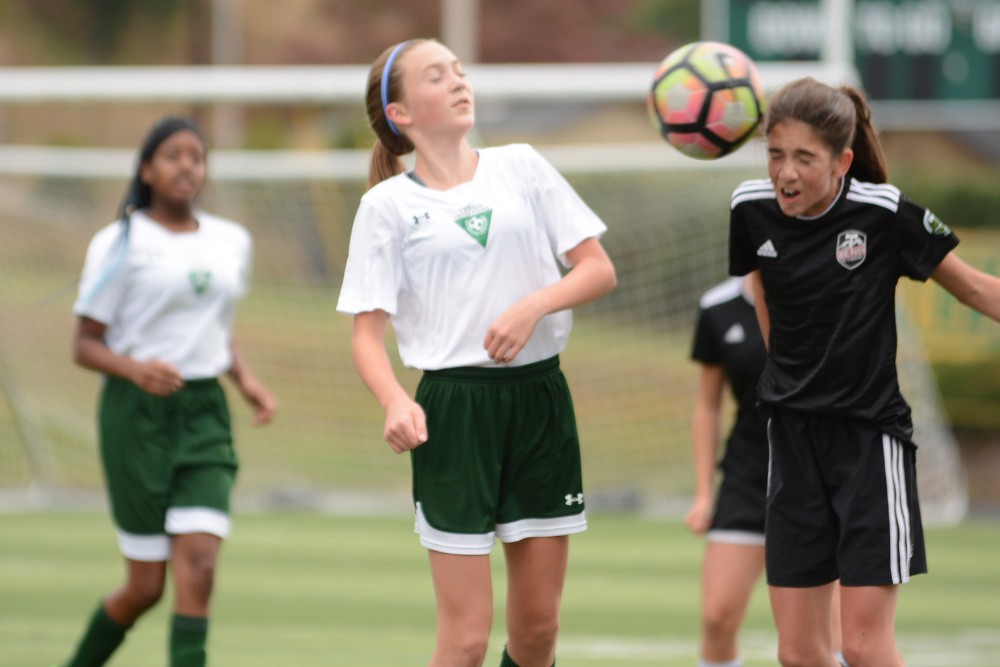 High school injury reports analyzed by InvestigateWest and Pamplin Media show that girls are twice as likely to get concussions as boys in Oregon. Girls in the 13U age group, pictured above, are the youngest allowed to use headers.


The Concussion Gap: Head injuries in girls soccer are an ‘Unpublicized Epidemic’

When it comes to concussion in sports, all eyes are on football, or so it seems. But it’s not just football that causes a high number of head injuries among young athletes.

National research has found girls are more likely to suffer a concussion than boys in any sport. In 2017, researchers at Northwestern University generated national headlines when they found concussion rates among young female soccer players were nearly as high as concussion rates for boys playing football — and roughly triple the rate of concussions in boys soccer.

In Oregon, injury reports from public high schools analyzed by InvestigateWest and Pamplin Media Group mirrored that trend, showing soccer concussions were second to those from football between 2015 and 2017. What’s more, at the schools that included the gender of injured athletes, there were nearly twice as many reports of possible concussions for girls playing soccer than boys in the sport.

The rate of concussions in girls soccer worries local experts like Jim Chesnutt, a doctor in sports medicine at Oregon Health & Science University, who says those injuries are not widely recognized, even as concussion rates rise for girls playing soccer.

“In a lot of ways, it’s a growing epidemic for young girls that I think has gone unpublicized,” said Chesnutt, co-director of the Oregon Concussion Awareness and Management Program and a member of the Governor’s Task Force on Traumatic Brain Injury.

It’s understandable that much of the youth concussion conversation centers on football, given the physical contact that is visibly — and audibly — evident on every play, as well as the large rosters and the lengthy lists of players who are injured.

But if you compare girls soccer with football, and only look at the high school participation and injury data, “you’re missing a gigantic part of the picture,” according to Michael Koester, a doctor of sports medicine at the Slocum Center in Eugene. He directs its sports concussion program and serves as the chair of the Sports Medicine Advisory Committee for the National Federation of State High School Associations.

Koester notes that high school boys play eight to 10 football games per season, and typically play other sports in the off-season.

Girls, however, play 15 to 20 soccer games in a high school season, but when that season ends, they may play another 80-plus games throughout the winter, spring and summer with club teams, said Koester, who, like Chesnutt, is a medical adviser to the Oregon Schools Activities Association.

“If we’re looking at injury risk by athletic exposure,” which is one practice or game, a standard in evaluating risk, Koester said, female soccer players probably are playing five if not 10 times more practices and games than football players.

“The thought used to be that this was all revolving around, ‘Wow! They want to get their kid a scholarship,’ ” he said. “Now it’s kind of gotten to the point where there’s so much single-sport participation that we see kids that are specializing in sport early, just so they’ll be able to make their high school team.”

Single-sport athletes are more prone to injury in any sport. According to a study by scientists at the University of Wisconsin, high school athletes who specialized in just one sport at an early age were twice as likely to suffer injuries to their lower extremities.

Another factor is the evolution of sports.

Angella Bond is an athletic trainer for Tuality Sports Medicine and works on the sidelines with athletes at Hillsboro schools. Anecdotally, she said, all athletes push to be bigger, faster and stronger. Soccer is no exception, nor are girls.

As athletes develop, they take bigger hits at higher speeds, and competitive games build on their momentum. As competition grows in girls soccer, the sport is trending to be more aggressive, she said.

“Unfortunately, I think that happens with girls sports,” she said. “Arms fly a little bit more.”

According to the American Academy of Pediatrics, soccer — unlike football, ice hockey and lacrosse — is not a “collision sport.” But it is a “contact sport” because athletes “routinely make contact with each other or inanimate objects.”

Header balls, though often singled out as a source of concussions, are not necessarily to blame.

The force created when a soccer ball meets a head can rattle a brain, but data increasingly points to other factors when competitors vie for a ball in the air.

According to a study by The Research Institute at Nationwide Children’s Hospital, while headers accounted for 27 percent of concussions, it was knocks with other players on aerial play — including head-to-head contact and arms and elbows to the head — and contact with the ground that accounted for 70 percent of those concussions in girls soccer, suggesting aggressive play is a factor in most concussions involving headers. 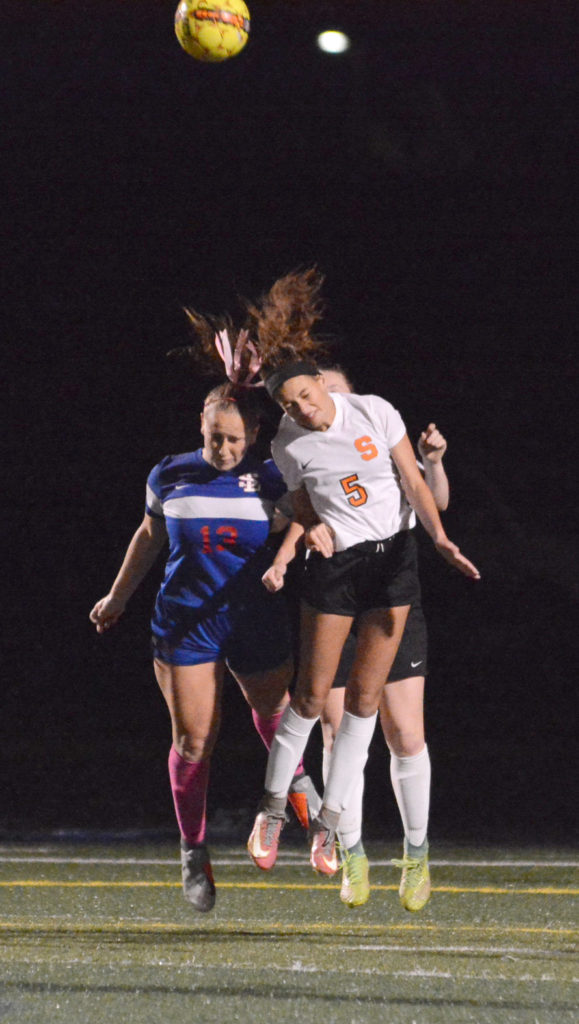 But why are girls more prone to concussions than boys while playing soccer? The prevailing theories focus on their weaker neck-muscle development, weaker body strength (needed to stabilize the neck and head during aerial play), and more frequent contact with the ground. A year ago, a study in the Journal of the American Osteopathic Association found that female high school soccer players took twice as long as male players to recover.

It’s also possible that girls don’t benefit as much from early treatment. A recent study published by the American Academy of Pediatrics found that girls are five times more likely than boys to stay on the pitch and play through a head injury.

And the soccer community has been slow to recognize the hard hits its girls are taking. Instead, soccer is at the forefront of the cultural empowerment of girls.

“The worry is that the take-home message is that (girls soccer) is healthy and fantastic and nothing can be bad about it,” said Koester, who says an opposite negative message, equally extreme, is more often associated with boys playing football.

Concussion education and awareness in girls soccer is paramount, according to local experts such as Chesnutt.

“I think the way to decrease it is to really analyze how we can modify the amount of body contact that goes on in soccer to limit the dangerous aggressive behavior that is associated with concussion,” he said.

Football, for example, has reduced head-to-head helmet play, limited full-contact practices and games, and zeroed in on the specialty teams with the highest concussion rates.

“Football has really done, I think, an exceptional job of identifying some areas where there have been some definite higher incidents and some problems,” said Chesnutt, who lectures nationally about youth concussions. “As a group of coaches, leagues, parents and referees, they’ve all looked at it and come up with some solutions that have decreased concussion rates. And I think it’s time for soccer to do the same thing.”