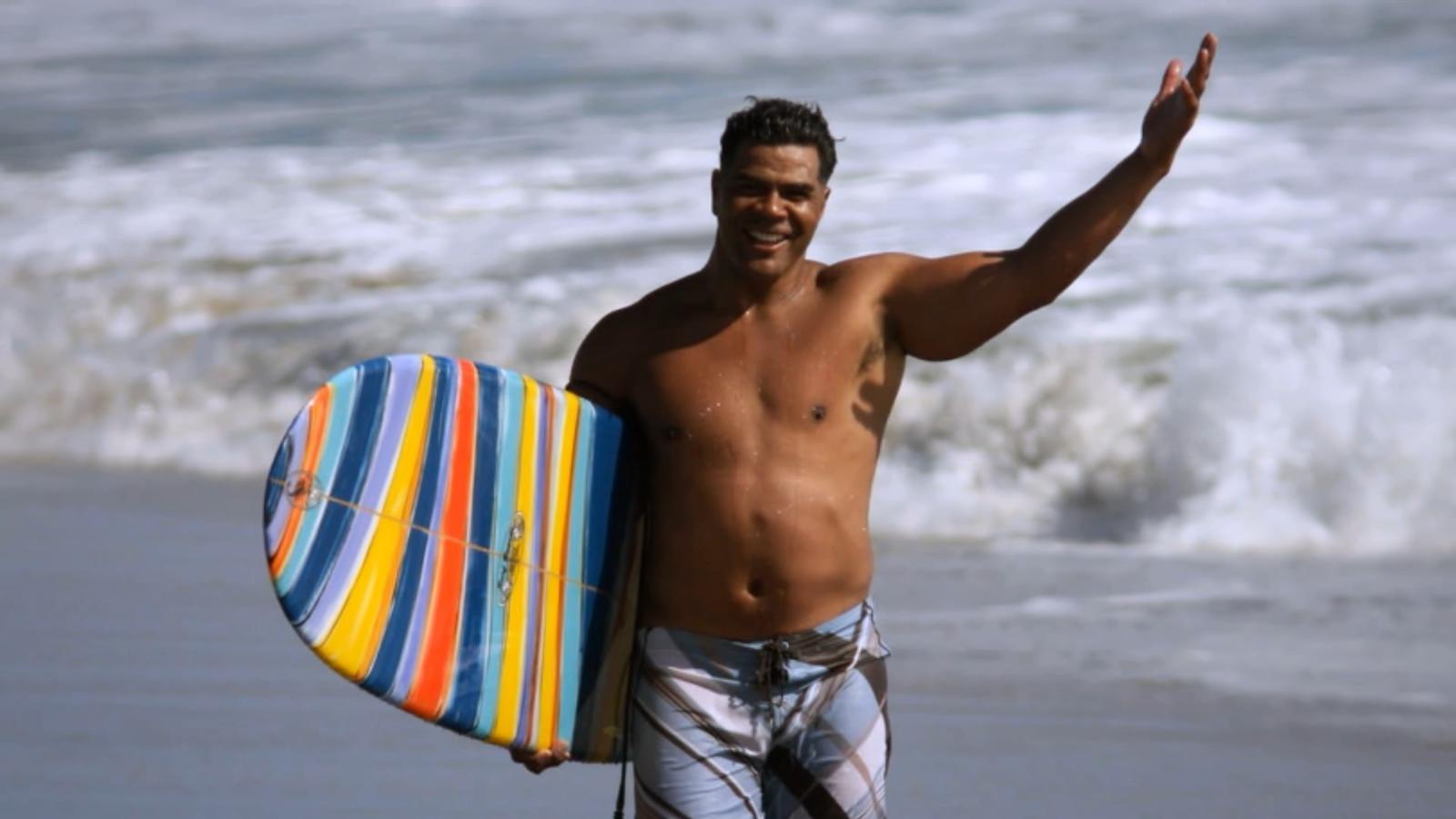 Junior Seau, shown at his beloved Pacific Ocean in the ESPN Films “30 for 30” documentary “Seau,” which premieres Thursday. (ESPN Films)

An aerial view of the Oceanside coast, in full sparkle and splendor below, grandly eases viewers into “Seau,” an ESPN Films documentary in the “30 for 30” series that debuts Thursday on the streaming service ESPN+.

It’s a sunny scene, the Pacific Ocean’s turquoise waves illuminated as they roll toward the white beach. The late Junior Seau told friends he found peace paddling on these waters, deep into his life alongside the town where he’d grown up.

Up at dawn with a yellow long-board and oar in hand, Seau had only a short walk from his beachfront home to the water.

Yet the former Chargers linebacker, role model and local philanthropist was then also writing in a journal of bouts with depression, memory loss and perceived guilt. There were headaches, too, and nights plagued by insomnia. “Buddy,” he’d told a friend and professional soccer player who’d suffered a brain injury from heading a ball, “I’ve had a concussion since I was 15.”

Diary entries also revealed feelings of humiliation and embarrassment over not living up to expectations of others and himself, and of feeling used by others.

“The world has nothing for me,” Seau pens in one entry, the cursive words all too legible.

One of Seau’s surviving adult children, after reading the grim line aloud, wonders why his father didn’t regard his family as something in this apparent world of nothing.

Why couldn’t they have been a lifeline for him to reach out and grasp?

“Seau,” produced and directed by Kirby Bradley, lets viewers draw their own conclusions about a complicated life that ended one May morning six years ago, at age 43, with a self-inflicted gunshot wound to the chest, but not before we hear from an array of family members, friends and experts in football and brain science.

At the end of the 90-minute film, themes of redemption and hope are raised.

“Let’s all walk from here being better for having known Junior Seau and the impact he had on our lives,” NFL quarterback Drew Brees, a former Chargers teammate of the Hall of Fame linebacker, concludes near the film’s end.

Former Chargers lineman Aaron Taylor notes that in death, Seau drew extraordinary attention to the link between head trauma and a degenerative brain disease, CTE, revealed in a tissue sample sent to a brain scientists at the family’s request.

Exciting beginnings and success are a thread to the film, followed often by bitter detours or hurtful endings.

Seau took to sports at Oceanside High with a passion that rivaled his stunning blend of size, speed and agility. If he was slamming into football ball-carriers or catching passes, scoring baskets or throwing the discus and shot, he was a “force of nature” for the green-and-white-clad Pirates, observers said.

A flood of football scholarship offers came to the small home where Seau and his brothers slept in a tiny garage.

Jubilation ensued when Seau chose USC, keeping him close to his parents and siblings and the tight-knit Samoan-American community in Oceanside. A similar celebration arose in 1990 when the Chargers drafted him fifth overall. “I’m a real momma’s boy,” Seau said, pulling on a blue team cap.

Playing for his beloved “Diego,” he led the long-struggling Chargers to the playoffs in just his third season, and their first Super Bowl two years later. “Now the world is gonna know the San Diego Chargers,” he told some 70,000 celebrants in Mission Valley after the team returned from claiming the 1994 AFC title in Pittsburgh.

If Oceanside lost a game in which he played, Junior lost his lunch money. It was the price his father exacted.

The thrill of signing with USC gave way to humiliation when a failed admittance test made him ineligible as a freshman. His father refused to talk to him in response, deeming the failure an embarrassment to the family. After a dominant junior year with USC, there would be no senior year. Making money was the next step, in no small part because he wanted to support his parents and other family members.

The Chargers couldn’t build upon their Super Bowl season, and the team’s constant losing wore on Seau.

When the Chargers traded him in the spring of 2003, after 13 seasons with the club, Seau was hurt that the team — Stay Unclassy, San Diego? — called not him but his agent to tell him the news. “I know that was hard on him,” said the agent, Steve Feldman.

Gina Seau was working for the Chargers in marketing when she first met Seau early in his NFL career.

She recalled “very kind eyes” and a “very soft voice” that almost “didn’t match the size and stature.”

The two would marry, but erratic behavior that Gina Seau linked to numerous football-related head injuries — “My head is on fire,” he told her — led to a divorce in 2002. The two remained friends. Believing that driving off a steep coastal cliff in October 2010 wasn’t an accident, Gina pleaded with her former husband to get help.

Here’s hoping that if there’s a “Seau II,” events yet to transpire bring more developments of redemption. Say, a cure for CTE.